Cuckoo gets an image makeover 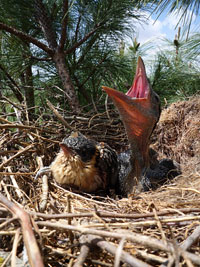 The cuckoo is well known for sneaking in her eggs into the crow’s nest, leaving the crow to take care of her chicks. In many cases, the crow could lose her own chicks. As defence, some species of crows fight back by either throwing the alien eggs out or mobbing the adult cuckoos, but all species have not developed this ability. It is hypothesised that the defence has not been developed as the contact between other crow species and the cuckoo is recent or that the costs outweigh benefits of developing the defence.

The study was carried out on great spotted cuckoos (Clamator glandarius) and the carrion crows (Corvus corone corone) in northern Spain. In this area, the cuckoo parasitize up to 67.7 per cent of crow nests. 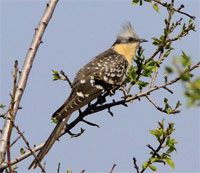 Parasitised nests were found to have lower rates of predation-induced failure. Throughout the 16 seasons, parasitized and non-parasitized broods did not significantly differ in the number of crows fledged, though results suggest a slight benefit from raising a cuckoo, write the researchers in an article published on March 21 in the journal, Science.  The parasitized nests were more successful in increasing crow population than the nests that were cuckoo-free—they were more likely to produce at least one crow fledgling.

Magic formula to ward off predators 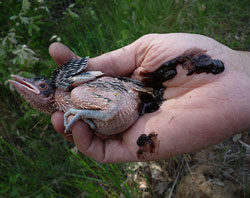 The researchers say that the cuckoo chicks protect the nest by producing a chemical which wards off predators. This chemical is released when the chick is harassed. The researchers analysed this substance and found that it is made up of acids, indoles, phenols and several sulfur-containing compounds. When crow nest predators such as mammals and raptor birds were fed food treated with this chemical, the predators could not be attracted.

The team did not find any evidence that the presence of the cuckoo chick affected the quality of the crow's own offspring. The lead author of this study is Daniela Canestrari of Department of Biology of Organisms and Systems, University of Oviedo, Spain.