There is no escaping the ubiquitous 'kanhi' in Kerala 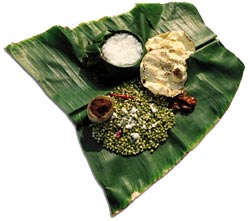 Kanhi or rice gruel, eaten with payaru puzhukku (boiled or steamed green gram), most definitely typifies Kerala's varied cuisine. Boiled or steamed low-oil foods are typical of this part of the country. Kanhi, though, has a special place. It permeates Kerala's socio-cultural fabric deeply. In fact, kanhi prepared with podi ari (broken rice), which is easier to digest, is also traditionally used as weaning food.

It is said in Kerala: " Onam vannaalum, unni pirannaalum, koranu kumbilil kanhi. " (Whether it is the Onam season or the birth of a baby, a poor person's bowl contains only kanhi.) This is significant because though kanhi is eaten through the year, people with even a little to spare avoid kanhi through the 10 days of Onam. Though every household eats kanhi, it is culturally well established as the poor person's food. Could this have anything to do with the fact that the water content is higher than the rice content?

Of course, the affluent have their variations of the humble kanhi. There is palkanhi (kanhi cooked in milk), for example. One could add a touch of clarified butter (ghee), coconut milk or grated coconut. There are side-dishes that could spice it up further: payaru puzhukku (which is the traditional combination with kanhi), pappadam (fried or roasted crispies) and coconut chutney. The poorer home has its own set of side-dishes to go with kanhi: tapioca, erisseri (a gravy preparation made with pumpkin) and pickle.

Annadaanam (distribution of food to the poor) is called 'kanhivizhuthu' in Kerala. Literally, this translates to pouring kanhi, which is the usual preparation for these occasions. To add nutritional balance to the meal, green gram and erisseri made with pumpkin are also served. Green gram, like most pulses, is rich in proteins. Pumpkin is rich in minerals and vitamins a and e.

The concept of kanhi as a cultural icon is woven even into the language of the state, Malayalam. When, for example, a person is completely destitute, it is said: kanhikudi mutti (even the source of kanhi is blocked). When speaking of someone who's died a miserable death, it is said, " Kanhivellam erangaathe marichu poyi. (S/he died without being able to drink even kanhi water.)"

Interestingly, kanhi is also used as a term of abuse. A person is called kanhi to denote that s/he is not very smart. This probably stems from the fact that kanhi is well recognised as a poor person's meal.

Kanhi has other roles to play as well. Podi ari kanhi and boiled green gram is given to ailing people, old persons and children. It is nutritious and easy to digest. There is also some ritual significance attached to this humble dish. It is the traditional breakfast on vishu (first day of the Malayali calendar) mornings. When people had more time at hand, kanhi was served in little bowls made of banana leaves and spoons made of jackfruit leaves. The leaves add special flavour to the hot kanhi.

V K Madhavan Kutty is a well-known writer in Malayalam