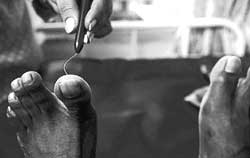 medicinal food might just replace the pill that diabetics need to take before every meal. Studies carried out by us researchers have shown the extract of a woody climber, Salacia oblonga, taken as part of the diet regulates the blood sugar levels in a way similar to that achieved by anti-diabetic drugs. The plant is found in India (locally called ponkoranti) and Sri Lanka.

Scientists at the Ohio State University tested Salacia on 39 healthy volunteers, who were given a study beverage containing fat, carbohydrate, protein and 500 milligramme (mg), 700 mg or 1,000 mg of the plant extract. Some were given the drink without Salacia and they constituted the control group. Blood glucose and serum insulin were measured for everyone right after taking the beverage and also 2 hours later. Similarly, the hydrogen in exhaled breath -- an indication of the breakdown of carbohydrates -- was measured just after the drink, and then, hourly for 8 hours. The volunteers were given the drink at three instances and each time all the tests were done.

The scientists found that compared with the control, the 1,000-mg Salacia extract dose showed the best results by reducing blood glucose and serum insulin by 23 per cent and 29 per cent respectively. Breath hydrogen excretion showed an increase with greater dose of the extract. There were no side effects reported. The results appeared in the Journal of the American Dietetic Association (Vol 105, No 1).

"These kinds of reductions are similar to what we might see with prescription oral medications for people with diabetes," said Steve Hertzler, the study's co-author. "Unfortunately, there have not been enough studies of this herb... to say that we can replace the existing medications," he adds.

It is interesting to note that traditional Indian medicinal systems use Salacia, in combination with other plants, to control diabetes.