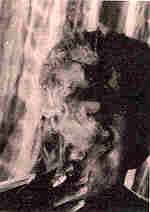 NICOTINE is often cursed as the most addictive drug. Recent discovery of an important bio-chemical difference in the brain tissues of smokers suggests another factor - independent of nicotine - by which smoking can become addictive.

Researchers in the Brookhaven National Laboratory, Upton, Louisiana, us, discovered an enzyme, monoamine oxidase B (MAO B), that breaks down dopamine, the chemical that activates the pleasure enhancing sites in the, brain. Using a scanning and imaging process they found out that the enzyme is almost 40 per cent less active in smokers. Persons with recorded addictions to drugs like cocaine and heroin have a sharply increased level of dopamine. On the other hand, victims of parkinson's disease - a nervous disorder little understood as yet -show unusually depressed levels of dopamine. The researchers say that their finding may go a long way to explain the rather queer observation that smokers have only half. the risk of contracting the disease.

Alexander H Glassman of the Columbia University in New York and George F Koob of the, Scripps Research Institute of La Jolla, California, hailed the research for opening a new Vista on the biological effects of cigarette smoking. Alan I Leshner, director of the us National Institute of Drug Abuse said that the study confirms the role of dopamine in nicotine addiction. The research team is now concentrating on identifying the ingredient(s) in tobacco smoke that suppresses MAO B.

Dopamine, essentially a neuron-transmitter; helps brain cells communicate With each other. Nicotine and other associated addictive drugs stimulate the release of dopamine and other chemical - messengers. Something in cigarette smoke actually delays the action of MAO B and this helps in a build up of dopamine. An excess of dopamine gives rise to euphoric feelings like those caused by cocaine and amphitamines.

The Brookhaven study also holds the promise to a possible antidote to Parkinson's disease. If smoking inhibits dopamine destruction, the researchers said, this could also help parry Parkinson's. Alternatively, some of the drugs currently in use to ward off Parkinson's might help in weaning smokers away from cigarettes.

The research, sponsored jointly by the state department of energy and the us National Institute of Health, shows that nicotine is not the only psychosomatic component that inhibits the breakdown of dopamine. It also shows a strong correlation between cigarettes and alcoholism and other addictions like drug abuse. Isolation of the unknown agent/agents in cigerette smoke is important to clinically treat addiction.

Koob, an expert in psychopharmacology, said in an interview that it should not be too difficult an ordeal to isolate the agent. This would be the first step, he said, in designing drugs that would, one day, be effective cures for diseases ranging from addiction and drug-dependence to parkinson's.