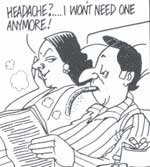 INCREASING the level of oxygen in blood could cure impotency in humans because it would stimulate production of nitric oxide, which causes penile tissue to relax and better engorge blood from the penile artery. This is important because any restriction of oxygen supply to penile tissue because of excessive smoking, diabetes and high-blood pressure causes impotence (New Scientist, Vol 137, No 1864).

Irwin Goldstein of Boston University, who headed a US-Israeli team of researchers, says when the penis is flaccid, the blood in its tissue has a low oxygen content. But during sleep, an automatic system increases blood supply to the penile tissue and the penis stiffens four or five times a night, each stiffening lasting about 45 minutes. "The possible function of these night-time erections," says Goldstein, "is to give the penis the oxygen it needs to function normally."