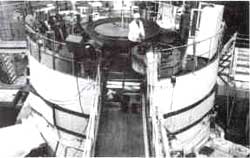 RUSSIA will cut its vast stockpiles of enriched uranium and plutonium and convert three plutonium-producing military reactors to civilian use by the year 2000. The Russian President, Boris Yeltsin, in a letter to the International Atomic Energy Agency, promised to remove 50 tonnes of plutonium and 500 tonnes of highly enriched uranium for its military programme. Experts say that such a move will substantially reduce the world's nuclear stockpiles.

It is estimated that as much as 230 tonnes of pluto-nium and 1,750 tonnes of enriched uranium have been produced for military pro-grammes around the world in the past 50 years. In the US, many politicians have feared that Russian nuclear material could "leak" into Libya or Iran, leading to global arms proliferation. Yeltsin said that Russia's decision would "directly contribute to the irreversibility of the nuclear disarmament process, confidence building and global stability." However, he said that the time period for the removal would depend on how quickly Russia could dismantle its nuclear missiles and build safe storage facilities.