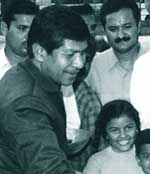 the latest buzz in Chhattisgarh's political arena is about how ex-revenue minister Nankiram Kanwar was made to give up the revenue portfolio recently due to his campaign against Bharat Aluminium Company Limited (balco), controlled by Sterlite Industries. Kanwar, a tribal leader, had sought to highlight balco's misdeeds in Korba district, including encroachment on revenue department's land and deforestation. After conducting a primary investigation, he had ordered balco to pay Rs 6,00 crore in fine and cost and directed the administration to seize the encroached land from the company. Within a day of issuing the order, he was the state's revenue minister no more!

Kanwar, who is now Chhattisgarh's new agriculture minister with the additional charge of forests, told Down To Earth, "Anyone who interferes in the case of balco will get his hands burnt. Companies like Sterlite are big players. They can do anything." balco is on an expansion spree, setting up 288 smelter pots with an investment of over Rs 5000 crore. The revenue department's investigation revealed that it occupies nearly 755.3 hectares (ha) land in nine villages of the district, of which it has got 335.8 ha legally. It has also cut down nearly 20,000 trees; the government records say the figure is just 430. In addition, it didn't pay the diversion fee of Rs 43 crore; the fee is doubled in case of encroachment, adding up to Rs 86 crore. balco spokesperson Deepak Pachpore, however, says the land under the company's control was allotted to it between 1968 and 1976.

Meanwhile, Kanwar is in no mood to give up. The day he assumed office as the forest minister, he initiated proceedings against balco for illegal deforestation. He has issued orders for seizure of the company's machinery and administrative buildings that violate the Forest Conservation Act.