Those who believe aerated drinks do nothing other than send adipose tissues into overdrive, spare a thought for the country’s excise department. 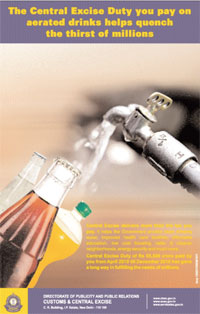 An ad issued by the department on February 21 exhorted: “Drink aerated dr-inks and do social service.” It explained this unlikely way of doing social good: “Excise duty on aerated drinks is used to meet drinking water requirements of millions.” B Vani, inspector at the department’s directorate of public relations said: “The ad tries to inculcate awareness on benefits of paying tax. It does not eulogise aerated drinks.”