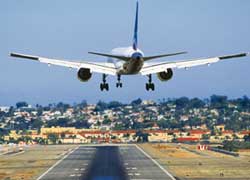 The European Union (eu) has decided that all flights taking off from and landing in its territory to buy carbon credits to offset greenhouse gas (ghg) emissions.

The implementation of the decision will be worked out by 2008, according to uk minister of state for climate change and environment Elliot Morley.

The inclusion of air transport in emission trading will give a boost to the carbon market. But carriers may witness escalation in costs that could make air travel expensive.

The decision will apply to all flights including non- eu ones, as the intent was a part of European Union Emission Trading Scheme. The scheme is eu's way of reducing ghg emissions with time-bound emission reduction targets for several sectors with strict penalties for non-compliance. At present, it does not include the transport sector.

Aircraft are responsible for three per cent of eu carbon emissions but the figure is rising. Forecasts say, by 2030, uk could contribute 25 per cent to world global warming.