Kolkata police justify ban on non-motorised transport in the city 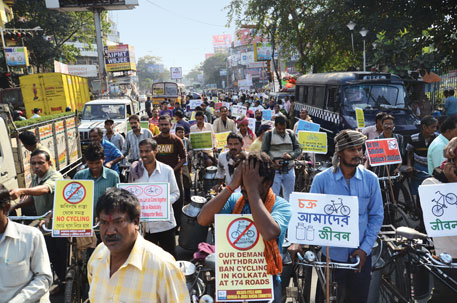 IN RESPONSE to a public interest petition against the ban on cycles in the city, Kolkata traffic police have said there was an urgent need to restrict the movement of non-motorised transport (NMT) to prevent traffic congestion. The petition was filed at the Kolkata High Court by cyclists and activists in January this year.

“Kolkata police have been continuously and systematically increasing the areas in which the prohibition is in force because cycles and other forms of non-motorised transport have been running indiscriminately through the roads,” wrote Dilip Kumar Adak, deputy commissioner of police, traffic department, in his statement before the court on April 4.

In 2008, the traffic police issued an order prohibiting cycling on 38 major thoroughfares in the city “to provide safe and uninterrupted flow of vehicular traffic”. The unprecedented move drew strong criticism and protests. Unperturbed, the police extended the ban to 174 roads in May last year, and prohibited cycling between 7 am and 11 pm on most city roads. The petitioners alleged that the “police were harassing and threatening cyclists like petty criminals” and requested the court to revoke the ban. In February, the police modified its notification. Police commissioner Surajit Kar Purkayastha issued a new directive which brought down the ban on cycling to 62 roads. However, the ban on NMT such as cycle vans and hand carts, continue on 174 roads.

The restriction on cycling makes little sense for Kolkata. It is the only metro in the country where road trips on cycles (11 per cent) outnumber trips made by cars (eight per cent), according to 2008 figures from the Union Ministry of Urban Development (MoUD). A recent study by Kolkata-based non-profit Switch On, which works on issues of sustainable development, shows NMT’s contribution to the state economy—through the movement of essential goods and commodities—is worth Rs 2.6 lakh crore every year. NMT saves the city of 850,000 tonnes in carbon emissions per year and 35 million litres of fuel. Cycling and NMT provide direct employment to over 60,000 people in the city, mostly to the economically poorer section of people, including milkmen, newspaper delivery boys and order suppliers.

A 2004 study by the Chittaranjan National Cancer Institute showed that 70 per cent people in Kolkata suffered from some form of respiratory disease, vehicular air pollution being the leading cause.

“Cities across the globe are moving towards cycles and non-motorised transport. London, a city Kolkata aspires to become, has witnessed a cycle boom since the turn of the 21st century,” says Ekta Kothari Jaju from Switch On, who is a petitioner in the case.

No amount of protests and petitions has moved the ruling Trinamool Congress government, whose attitude is evident from a blog post by party MP Derek O’Brien. He argues that “the ban is in keeping with the norm in major cities of the world” and “cycle restrictions prevent accidents and save lives, including those of cyclists who otherwise have to negotiate tight traffic that allows neither them nor bigger vehicles much room for manoeuvre”.

MoUD has been critical of the ban as it contravenes the National Urban Transport Policy of 2006, which encourages NMT. “The decision reeks of insensitivity towards the common citizen... there could be multiple arguments in favour of the ban, but lack of awareness about a sustainable transport system and disregard towards the needs of users and their rights reflect a callous approach to dealing with the problems of urban transport,” wrote Sudhir Krishna, secretary, MoUD, to the chief secretary of West Bengal on October 18, 2013, adding, “I would request you to look into the matter personally and direct the Kolkata traffic police to lift the ban on cycles immediately and undertake a proper study to resolve the traffic problems in a more equitable and sustainable manner.”

“Responding to our RTI queries, the police informed us that the ban is not based on any study which concludes such a measure will improve the traffic situation,” says Jaju. “The police want to continue with the ban as it is an additional source of income for them,” she alleges. The traffic police have been imposing fines ranging between Rs 70 to Rs 300 on errant cyclists. This is illegal as there is no provision of penalty in any of the notifications. For over a year this Down To Earth reporter has been speaking to cyclists in Kolkata who were forced to pay for plying on “no-cycling” roads. A defaulter is issued a stamped receipt which mentions neither the offence nor the amount of penalty.

“The 62 roads restricted for cycles under the new notification are selected in such a way that we are finding it difficult to commute from the south to the north of the city,” says Prasant Purkait, a petitioner in the case who delivers pest-control services on his bicycle. “The police abuse and threaten us, extract fines and in some cases confiscate cycles without issuing any receipt,” he adds.

In his statement to the high court, Adak denied imposition of fines or confiscation of cycles. “It is amazing that a statement has been made regarding police atrocities (in the PIL)... Since law is social engineering and voice of the people, it will prevail over anything which is unfounded, uncalled for,” wrote Adak in his response. Kolkata police will surely look after the interests of the downtrodden and exploited, but not by sacrificing the interest of the public at large, he added.

In 2012, the Supreme Court had quashed the plea of the civic authorities in Delhi to regulate and cap the number of cycle rickshaws to ease congestion. In the landmark case filed by Delhi non-profit Manushi, Justice G S Singhvi asked the government counsel, “Do you dare confiscate and junk cars, the way you do with rickshaws? We know your mindset and how you treat the poor.”

For Kolkata’s cyclists, who continue to live with the ban for the sixth year, there seems to be no such respite.

CSE workshop: Our Right of Way: Walk and Cycle