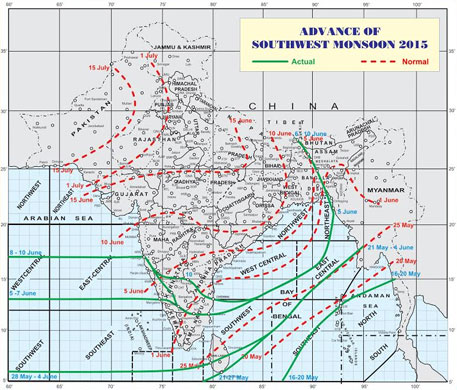 Even as the storm has moved away from the India’s west coast, heavy winds and isolated showers have been reported in parts of Gujarat, Konkan region of Goa and Karnataka. While the depression has brought rainfall in some regions, its impact on the southwest monsoon winds has delayed the advance of India’s monsoon.

Traditionally, as lands in north and central India heat up, a low pressure area is formed over these regions. Moisture-rich winds from the Indian Ocean then sweep across the subcontinent to fill the low-pressure void. It is these winds that form the cloud cover and usher in the monsoon. This year, unseasonal rains have delayed the formation of the low pressure system over north and central India and the advance of moisture-laden winds from the Indian Ocean.

Latest satellite images show convective or rain creating clouds off the southwestern coast and over the northeastern region. Despite the delays, Brahma Prakash Yadav, scientist at India Meteorological Department (IMD) is optimistic about the progression of the rain clouds. “The delays we have seen are nothing major, the cyclonic depression is bound to have some impact but this is not very large. We expect the monsoon to get back to normal within a day or two once cyclone Ashobaa achieves landfall and wind disturbances abate,” he says.

The monsoon has already suffered a setback with the confirmation and subsequent intensification of El Niño. This year, the El Niño pattern might even be reminiscent of the 1997-98 event which is the strongest El Niño recorded. In its recent forecast, IMD had said that there was a well-established El Nino this year. The weather agency had also revised the forecast for the Indian monsoon down from 93 per cent to 88 per cent (±4 per cent), sparking fears of deficient rainfall over the mainland.