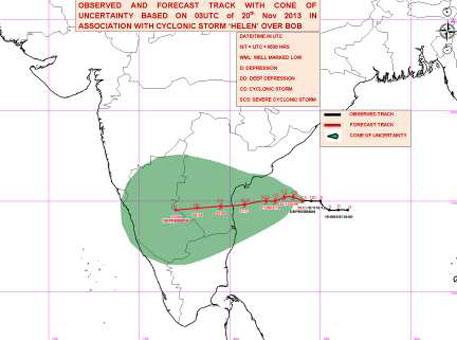 Only a month after facing flood fury caused by cyclone Phailin, Andhra Pradesh is set to face another storm. Cyclone Helen is expected to cross the south Andhra Pradesh coast on Thursday night, according to India Meteorological Department (IMD).

A depression over westcentral Bay of Bengal has intensified into a deep depression on the night of November 19 and is likely to make landfall at Kavali in Nellore district of south coastal Andhra Pradesh on Thursday, said the meteorological agency.

The IMD, in its alert, has recommended a total suspension of fishing operations on the coasts of North Andhra Pradesh and north Tamil Nadu.

“Isolated heavy to very heavy falls would occur over Rayalseema and adjoining north Tamil Nadu and moderate rainfall would occur at many places over south Odisha on Friday, November 21,” said IMD.

The cyclone, currently 430 kilometre east of Kavali, 470 km east-northeast of Chennai, 320 km east-southeast of Machilipatnam and 290 km south-southeast of Vishakhapatnam, is expected to intensify into a severe cyclonic storm in the next 24 hours and bring heavy to very heavy rainfall in coastal Andhra Pradesh and north coastal Tamil Nadu from tonight.