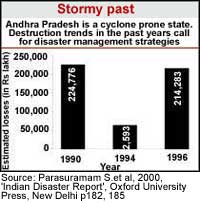 The term cyclone includes all tropical storms. They start as swirls of cloud and rain that eventually intensify into storms.The Indian sub-continent is the worst affected part in the world. Although India accounts for only six per cent of the cyclones worldwide, it records the maximum damage. Past 122 years' data shows November and May have the maximum cyclone frequency over the North Indian Ocean. Cyclones devastate life and property in the affected areas. The 1999 Orissa super cyclone rendered a third of the population homeless. The 1998 Gujrat cyclone caused export losses worth about Rs 8,400 million at the Kandla port