There are just 5,000 river dolphins left in India and unless strict measures are undertaken to protect the remaining population, warn experts, the mammal will soon be extinct 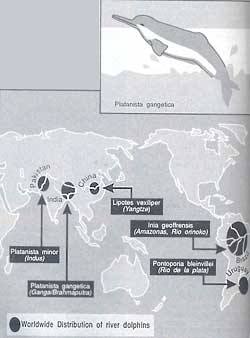 THE RIVER dolphin (Platanista gangetica), once teeming in the Ganga, Brahmaputra, Mahanadi and Karnaphuli rivers, has had its numbers reduced drastically because of river diversion for irrigation, dam construction, river traffic, increased fishing, poaching and pollution.

As a result, the river dolphin is not to be found now in the Mahanadi and the Karnaphuli though they continue to exist in the Ganga-Brahmaputra river systems in India, Bangladesh, Bhutan and Nepal. This is in contrast to the evidence from studies in the late 1970s when dolphins would swim to the upper reaches of the Ganga.

The total number of dolphins in the Ganga delta is estimated at 3,500, and those in the Brahmaputra 3,000. The total dolphin population is estimated at about 5,000 -- not a very high figure as more than 10 per cent of this is killed every year.

The heavy diversion of water at Farakka has resulted in a loss of habitat for the dolphins below the barrage, while the Katpai dams on the Karnaphuli has isolated them above and below the dams. They eventually disappeared due to poaching above the dam and pollution below the dam. Numerous dams across the various tributaries of the Ganga have further restricted the movement of the dolphins and, unfortunately for them, many more dams are under construction or in the planning stage.

Boat traffic has also increased on the Ganga in recent years and the noise of these engines impair the dolphins' sonar systems, which they use to get food and navigate. Fishing on the river is another hazard, for the dolphins get trapped in the nets and drown, especially during the dry months when there is less water in the river. The use of nylon nets makes it impossible for dolphins to escape if they get entangled, unlike nets made of hemp and cotton which the dolphins could break through and escape.

Poaching is another threat because a belief in the medicinal properties of the meat and oil of dolphins has created greater demand. Dolphin oil is also used to lure cat fish (Glupisma gerua) and about 500 fishermen in the Ganga and 300 more in the Brahmaputra depend on this mode of fishing for their livelihood. About 200 dolphins are probably required to support this type of fishing and about 150 dolphins are caught annually for this purpose in Bhagalpur and Colgone and 150 more are harpooned in Bangladesh. In Bhagalpur, 1 kg of dolphin oil can cost almost Rs 80.

Pollution is also interfering with the food chain of the dolphins, especially during the summer months when the flow is sluggish and pollution is high. As the population of the Ganga basin increases, the extent of pollution will also increase.

Declaration of dolphin sanctuaries, strict implementation of conservation laws against poaching and a ban on gill nets are urgently needed measures. Also, as experiments indicate that shark liver oil and sardine oil are just as effective in luring catfish as dolphin oil, their use should be encouraged in river fishing, so that it drastically reduces the poaching of dolphins.