Sandwiched between an encroaching sea and dams that prevent silt from reaching it, the Nile delta seems doomed. 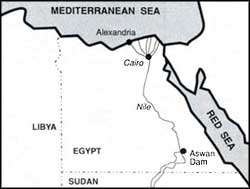 THE NILE delta lies trapped between a dammed Nile and a rapacious sea that is constantly threatening to swallow it up. The death of the delta, which constitutes two-thirds of Egypt's habitable land, will be catastrophic because with 1.33 million births every year, Egypt's dependence on the river and its delta is increasing.

D J Stanley and A G Warney of the Smithsonian Institution have constructed a model that predicts the behaviour -- for the next 60 years -- of natural factors that control the delta's evolution. The model predicts coastal erosion will increase as there is a greater outflow of sediment from the delta than inflow, because of the Aswan Dam upstream. The area of the four remaining lagoons will be reduced, with a substantial increase in pollution levels. As the sea level rises, according to current natural trends, coastal sand barriers will move landward, swamping the northern parts of the lagoons.
Egypt's greatest undoing was the disruption of the natural flooding cycle of the Nile, which underwent drastic changes with the construction of the Lower Aswan Dam early this century. But in 1964, the closure of the High Aswan Dam completely altered the Nile's flooding rhythm, trapping virtually all the sediment in Lake Nasser.

The consequences were disastrous: The delta coastline was eroded much faster; the sea began encroaching upon low-lying areas of the delta; fertile silt no longer reached the delta; salt content of cultivated land rose; fish stocks in the lagoons declined because of decreased nutrients reaching the coast; and water hyacinths choked canals and waterways.

Further, because of a dense network of irrigation channels that run throughout the valley and the delta, no fresh water reaches the sea. The water draining into the northern delta is polluted and because most of it is trapped by the lagoons, it poses a threat to fisheries and the habitats of migrating birds.

Nevertheless, Stanley and Warney believe the Egyptians can reverse the trend through building coastal protection structures, regulating Nile water supply, increasing groundwater exploitation along the delta margins, and constructing artificial wetlands and treatment facilities to recycle waste water. But does Egypt have the money to do all this?