US nuclear waste disposed of inappropriately 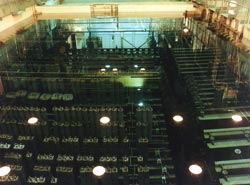 a space-saving technique being used to store spent nuclear fuel in the us has dramatically increased the risk of a catastrophic radiation release. So says a study conducted by a multi-institutional team of researchers, led by Frank von Hippel from the us-based Princeton University.

Strapped for long-term storage options, the nation's 103 nuclear power plants carelessly get rid of their narrow, 144-inch long rods of uranium, which after three or four years of use, no longer contain enough chemicals to sustain a nuclear reaction. For the first few years after they are taken out from a reactor, the rods continue to generate a lot of heat. Therefore, they are cooled in water-filled tanks. The tanks are designed to contain about 100 metric tonnes of the hottest rods. But, the researchers found that most contain more than 400 metric tonnes of the rods.

The tanks could be easily ruptured by a jet attack. The leaking water would spark a fire that could release radiation plume capable of contaminating 70 times more land than the area affected by the 1986 accident in Chernobyl.

The authors recommend reverting the tanks to their low-density configuration and building onsite storage facilities, based on the principle of air cooling. They estimate the cost of the task to be us $7 billion. Even without the threat of a terrorists attack, the opportunity to reduce the risk of more conventional mishaps would justify the expense, says von Hippel. "The Nuclear Regulatory Commission has been chewing the idea for the past 20 years. It never seems to do anything about it. That's one of the reasons why we did the study."