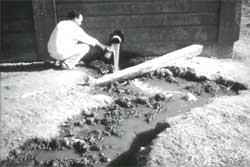 Analysis of over 100 effluent, sludge and soil samples from industrial sites in New Delhi, Gujarat, Maharashtra and Tamil Nadu indicate the presence of more than the permissible levels of POPs (Persistent Organic Pollutants). POPs -- basically organochlorines (most of which are pesticides that include polychlorobenzenes, ddt, dioxins and furans, aldrin, dieldrin and endrin, heptachlor, chlordane, hexachlorobenzene, mirex, and toxaphene) -- could pose serious long-term health problems in India. These and more were the findings of a technical report The Stranger, released by Greenpeace International in New Delhi, on November 15, 1996.

Bob Edwards, principal author and David Santillo of Greenpeace Research Laboratories, University of Exter, UK, and co-author of the report, stated that this is probably the first time that such studies have been carried out in Indian industrial sites. Organochlorines, which are dumped in an unregulated and undocumented manner, are difficult to break down in the environment. They get deposited in living tissues and multiply as they move from one level of the food chain to the next due to bioaccumulation. Besides being carcinogens, these chemicals mimic hormones in their effect, cross the placental barrier and exert their effects on the progeny, like abnormal sexual behaviour, low fertility and low IQ.

The Greenpeace report also evaluates the efficacy of existing and proposes future waste treatment technologies. Effluent samples after treatment at a common effluent treatment plant (CETP) near Nandesri in Gujarat showed high levels of POPs, despite the treatment implying that the CETP technology is not able to cope up with POPs and heavy metals other than mercury and cadmium. Although the Central Pollution Control Board is partly aware of the problem as indicated in their Comprehensive Industry Series, they prefer to adopt the policy of "Command and Ignore" rather than "Command and Control".

"Setting up of CETPs will lull the public into a false sense of security which is dangerous," opined Edwards. "Clean technology rather than clean-up technology is the only solution. Rather than financing CETPs, the World Bank should go in for funding of clean technologies," he said.