Daring to be different 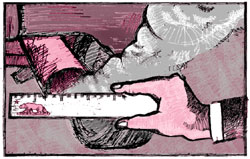 in a completely divergent move from the us President's rejection of the Kyoto Protocol last year, the California state senate has passed a new bill on regulating greenhouse gas (ghg) emissions. The bill aims to regulate emissions of heat-trapping gases such as carbon dioxide from passenger cars and light-duty trucks.

Approved despite severe opposition from the auto industry, the bill is now in the state assembly for ratification. If passed, it will be the first law in the us to directly limit such emissions from vehicles. The bill mainly focuses on the largest, but the least addressed, source of ghg emissions in the state: vehicular pollution. Passenger vehicles contribute to at least 40 per cent of all ghg emissions.

The California Air Resources Board has been entrusted with the task of setting the emission standards. The bill delegates the board to adopt the most feasible, cost-effective and technologically achievable measures to restrain ghgs emitted by passenger vehicles and light-duty trucks. The board will have two years to form these regulations and the legislature would then have a year to review them.

Scheduled to come into effect by 2006, the bill gives the industry until 2009 to comply with the emission standards. The board is also required to study the potential impact of the regulations on the state's economy. As California has the largest auto market in the country, new emission standards can trigger a change in the manufacture of cars and trucks used across the country. It would be impossible for automakers to manufacture vehicles meeting varying emission standards in different states. Roughly 10 per cent of the nation's new cars are sold in California.

Meanwhile, auto manufacturers -- who consider the bill as an indirect way to demand greater fuel efficiency in cars -- have launched an extensive campaign to defeat it.