The people of Kalahandi may have survived droughts and floods. But they see little hope in their battle against exploitation 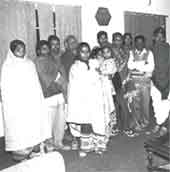 kalahandi contributes one-fourth of the total foodgrain procurement from Orissa. Despite this, nearly 200 people die of starvation every year, according to local people's representatives. About 90 per cent children are malnourished. This is an irony because Kalahandi's average per capita foodgrain production is higher than the per capita average for India, notes Jagdish Pradhan, president of the Bhubaneswar-based Sahabhagi Vikash Abhiyan, an organi-sation to promote the cooperative movement. The floods in December 1997 pushed local farmers further down the spiral of poverty. "Faulty policies and ruthless exploitation by vested interests have led to extreme poverty and suffering in Kalahandi," says Pradhan. Nearly every farmer lives below the poverty line.

Meanwhile, the National Human Rights Commission has directed the Union and the state governments to take immediate steps to prevent star-vation deaths in the state.A three-member commission headed by Justice M N Venketachaliah recently made a series of recommendations which include old age and disability pensions and other social security measures, employment generation in agriculture, ecological security, soil conservation, irrigation.

Nearly 70 per cent of the crop in Kalahandi was affected by a drought in 1996, one of the worst in last three decades. Hundreds of people suffered from chronic starvation, some starved to death. Ironically, the Food Corpo-ration of India, a government body, procured a record amount of paddy from the area in that year. One of the victims of the drought-hit area, Gomti, on a visit to New Delhi to apprise the Union government of their plight, says: "My husband died of starvation. I did not have anything to eat for five days." She got a compensatory amount of Rs 5,000 just a day before the National Human Rights Commission's team was scheduled to visit the area.

A year after the drought, the rain played havoc with Kalahandi. Heavy rain submerged a major part of the land since November 1997. By December, nearly 70 per cent of the crops were damaged by floods. At present, 90 per cent of the people rely only on agriculture. Local residents told Down To Earth that there has been hardly any support from the government for development of agriculture in Kalahandi. Farmers pay an interest of up to 450 per cent to money lenders for agricultural loans or money borrowed to keep them from starvation. "We are forced to sell our foodgrain to traders at a very low price. Since there is no government support, we have no alternative but to suffer at the hands of these people," says Thakurdas Mahananda, a farmer from Kalahandi.

Mahananda recalls that last year he took 120 quintals (1.2 tonne) of onion to a market located nearly 60 km away from his village. A trader bargained with him and purchased all of it at a throwaway price of Rs 400. "What do we get if we sell a crop at such a low price?," he laments. If the government had provided godown facilities in every panchayat, storing foodgrain would not have been a problem, says Mahananda. Lacking this facility, farmers have no alternative but to sell their crops to local traders at whatever price they can.

Damna Jani says he was approached by Western India Corporation Ltd, a sugar mill in Kalahandi, to grow sugarcane instead of paddy in his fields. He took a loan of Rs 10,000 from a rural deve-lopment bank to grow the crop. "I sold all my yield to the company," says Damna. The company owes him Rs 9,000, but even after six years, Damna is still waiting for the payment. Meanwhile, interest on his loan has mounted, and he has to now pay a total of Rs 15,200 to the bank, which is threatening to attach his property.

Most families depend on collection of minor forest produce like chironji (char seeds) to survive. They have no option but to sell this to marketing agents appointed by the government at prices between Rs 5 and Rs 10 per kg, while the market price ranges from Rs 150 to Rs 250 per kg. Local residents say that these agents do not hand over the procured forest produce to the government. Instead, they sell them in the open market in Orissa at high prices. Residents also blame government officials for conniving with agents. They have urged the government to take appropriate measures to help the poor in the area. But the future remains dark for the people of Kalahandi.