Dark side of the coin 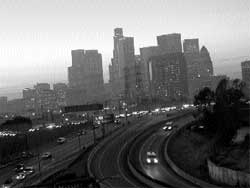 californian energy crisis is not simply a result of indiscreet state policy. The crisis stems from the combination of high regional natural gas prices, a large drop in hydroelectric power from dry weather conditions, and a demand shock due to the unseasonably warm summer of 2000. Moreover, air pollution regulations and retail price controls have aggravated these factors. These startling facts were revealed in a study recently conducted by the Cato Institute, a public policy research foundation based in Washington dc, usa (www.earthtimes.org, December 1, 2001).

California's Energy Crisis: What's Going On, Who's To Blame, and What To Do , the study, highlights that "the 1996 restructuring law has little to do with the run-up in wholesale power prices", although retail price caps caused blackouts by preventing utility companies from passing on fuel costs to consumers. In 1996, California adopted the Assembly Bill 1980, a state electricity restructuring plan, to allow for retail competition by placing retail price caps on electricity.

According to Jerry Taylor and Peter VanDoren, scholars of Cato, these findings suggest that a new approach to the California energy crisis is needed. So far liberals, including California's governor Gray Davis, have blamed corporate price and the state's 1996 restructuring law, while conservatives argue that overly restrictive regulations pushed by environmentalists together with the imposition of a central power spot market are to be blamed for the situation.

Taylor and VanDoren examined all the proposed reforms for the energy crisis, from price controls to public ownership, and found that "only a few (in any) accurately diagnose the problem or treat anything beyond the superficial economic symptoms of the underlying disease." So far the main solutions offered have been a state takeover of the industry energy conservation subsidies or adoption of long-term power contracts with generators.

The scholars call for the elimination of retail price caps to promote consumer price responsiveness and voluntary conservation. The argument made in the study is that "given the inelasticity of both the supply and the demand side of the electricity market, even moderate reductions in demand, as a result of freeing prices, would have a major effect on wholesale prices."

The energy crisis in California has worsened over the years, with the winter of 2000 seeing the prices of natural gas soaring to their highest level in 15 years. In April 2001, California's public utility increased the electricity prices by 46 per cent -- the largest hike in the state's history (see 'Shocking hike', Down To Earth , Vol 9, No 23, April 30, 2001).