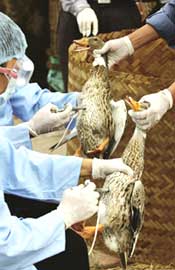 in a quantum leap that might spell a windfall for virologists, 170 strains of the avian influenza virus have been decoded by researchers from St Jude Children's Research Hospital, Tennessee, in usa. The effort doubled the amount of genetic information available on bird flu viruses in one go.

The team used around 7,000 viral samples from ducks, gulls, poultry and other birds from around the globe collected by Robert Webster, an infectious diseases researcher also at the hospital. The findings appeared in the online version of Science on January 26, 2006.

On comparing the gentic sequences, the scientists found that a viral protein known as ns1 is manufactured inside infected cells and blocks their anti-viral response, which could explain why some viruses are so damaging to humans. The team also showed that the bird form of ns1 can bind to 30 human proteins. The information can be used to develop ways to fight the avian influenza virus.

The scientists hope that further examination of the data will help answer questions about the origin of the virus and about the other proteins responsible for the virus' pathogenicity.