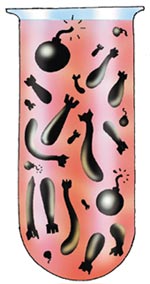 US scientists have mooted a database containing genetic details of all types of bacteria and viruses that are potential bioweapon agents. It is felt that such a record will give scientists quick answers in the event of a major attack. The experts made this and a host of similar suggestions at the annual meeting of the American Associa-tion for the Advance-ment of Science in Boston.

Other ideas include providing tighter security in laboratories where dangerous microbes are stored and development of new methods to diagnose infections. The researchers have also urged the us government to engage with other nations on the issue. The Bush administration has reserved huge sums of money for bioterrorism countermeasures and set up a scientific advisory committee to decide how to spend it.

Extra funding has already gone into sequencing the genome of the anthrax bacterium, (Bacillus anthracis).This strain killed Bob Stevens, a picture editor with the Sun newspaper in Florida. He was the first to die in the post-9/11 anthrax attack.

The work is nearing completion at The Institute of Genomic Research. Scientists aver that there is an urgent need to recruit more researchers with expertise in diseases like anthrax.