Rays of the rising sun burn a hole in the ozone layer every morning, claims a new study 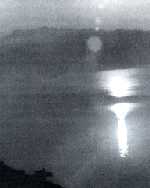 daylight is not all dewdrops and honey. It also contributes to the destruction of the ozone layer in the stratosphere, say Patrick Aimedieu of France's National Space Research Centre and Bob Sheldon of the University of Houston, us, who base their claims on studies using balloons above southern France ( New Scientist , Vol 153, No 2067).

Photochemical reactions in the upper atmosphere normally create and destroy ozone at about equal rates, thus maintaining it at a fairly constant level. The balloon experiment confirmed that this is what happens during the hours of daylight. But it revealed other alarming details as well.

As the first shaft of the dawn light strikes the upper atmosphere, ozone levels start dropping and continue to fall for about 20 minutes until half of the total is destroyed. At that point, ozone levels begin to rise and are restored within about 10 minutes. Sheldon speculates that this odd cycle is because the path of dawn light is bent by the upper atmosphere, which results in only low-energy wavelengths reaching the stratosphere. These low-energy radiations promote reactions that destroy ozone. Later, as the sun's rays take a more direct route through the atmosphere to the earth, the proportion of high-energy wavelengths increases and ozone creation begins. If this ozone effect is widespread in the upper atmosphere, as Sheldon believes, then a wave of destruction travels westwards round the globe, coinciding with the dawn.

The dawn hole (formation of ozone hole that coincides with dawn) does not seem to reach the lower levels of the atmosphere, where the densest part of the ozone layer forms. As it takes the sun longer to rise in winter, the period of ozone destruction at dawn - and probably again at dusk - will also be longer in that season, says Sheldon. Thus, the effect may play a role in the seasonal cycle of the ozone layer, which is thinner in winter. Neil Harris of the European Ozone Research Coordinating Unit in Cambridge, uk , says, "We knew there was a daily ozone cycle, but nothing this intense and quick."