Days before Christmas, Santa took a green route in Europe 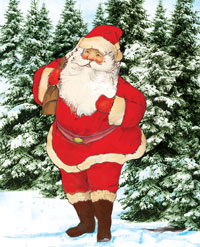 Taking some time off his busy schedule before Christmas celebrations, Santa Claus decided to spend a week for a different cause this year. He was appointed as the ambassador for European Forest Week, celebrated from December 9-13, 2013, to encourage children to look after forests to ensure they are a gift that keeps on giving.

The week was marked with events, organised throughout Europe, to highlight the contribution of forests, forest products and services to a green economy.  In a video launched by Food and Agriculture Organization (FAO) of the United Nations website, Santa could be seen introducing his magical, forest-covered homeland to children and telling them that forests are of vital importance and need to be taken good care of.

On December 9, delegates from 40 countries gathered in Rovaniemi, Finland to discuss how forests could help European nations move further and agreed upon the Rovaniemi Action Plan that provides a “solid platform for the forest sector to support transformation to a green bio-based economy”.

Earlier reports and experts have suggested that forests will play a critical role in greening the economy as they can sustainably provide alternatives to a range of products that are harmful to the environment and the climate.

"Europe is a forest-rich continent thanks to tireless efforts over the past 200 years to stop deforestation, restore forests and manage them sustainably," said FAO's assistant director-general for forestry, Eduardo Rojas-Briales, at the Finland conference.

In August this year, a study had suggested that the continent's forests had been recovering in recent times after centuries of stock decline and deforestation. However, they are showing signs of reaching a saturation point as carbon sinks and, therefore, cannot be “promoted as a way to offset rising emissions” anymore. The 2011 State of Europe's Forests report, considered to be the most comprehensive study of its kind, showed that trees covered almost half of Europe's land area and absorbed about 10 per cent of Europe's annual greenhouse gas emissions. Some findings have also suggested that Europe is the most forest resource-rich region in the world.

But like many other regions across the world, increasing land use for construction and soaring pollution levels have raised alarms in the forest-rich continent as well.
Now it is to be seen if Santa can bring the region the gift of greener forests and cleaner air. sooner or later.