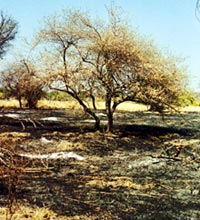 World heritage site, the Keoladeo National Park of Bharatpur, Rajasthan, is known to attract aquatic birds from all over the world every year. This year, however, the nests are all empty, and the park reeling under a severe drought thanks to squabbling political forces.

The problem centres round the Panchana dam, the main source of water in the area and the tug-of-war over it between park officials and the farmers of the Karnauli district, 90 kilometres away from the park. Though the monsoon this year was delayed, heavy showers ensured that the dam was filled to capacity. So much so that it had to release 350 million cubic feet of excess water. This water went down the Gambhiri river and the riverbed soaked it up before it could be used by the park. Seeing how this jeopardised the park's role as a host to visiting birds, the state government ordered release of waters from the dam. But this has triggered unrest among Karnauli farmers , courtesy local political parties.