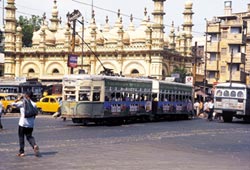 The sight of environment-friendly electric trams trundling along Kolkata's chaotic roads could soon be a thing of the past. The West Bengal government and Kolkata Municipal Corporation appear to have put them on the backburner. Many suspect a strong automobile and real estate lobby behind this apparent apathy. Some reports say a few tram tracks in the city will be 'dereserved' (the track boulevards will be levelled to enable other vehicles to ply on the stretch).

Tram crusader Debashish Bhattacharya points out that the Calcutta Tram Corporation (ctc) has to follow the diktats of the Writers' Buildings (the West Bengal state secretariat). Bhattacharya is sure the industry lobby is behind this. " ctc runs its depots on huge tracts of lands in the city's most coveted areas. Those lands would be up for grabs once trams are phased out. The bus lobby is also strong. It doesn't want trams on its routes as the vehicle can carry more people," he says.

But Kolkata's mayor Subrata Mukherjee differs. "The pro-tram brigade should talk to central Kolkata residents. We have received numerous complaints of noise pollution and health hazards from those who live in houses close to tram tracks."