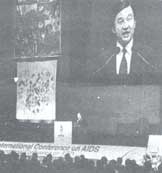 ABOUT 3 million people worldwide were infected with HIV in the past 12 months, bringing the total to 17 million. Against this background, the 10th Annual International AIDS Conference in Yokohama, Japan, which concluded on August 11, turned out to be money and energy badly spent.

There were no reports of dramatic breakthroughs on AIDS research. "Anyone with HIV won't find much solace at this meeting," acknowledged Mervyn Silverman, president of the American Foundation for AIDS Research.

The only bright spot was the efficacy of the azt drug in reducing the chances of maternal HIV transmission to a newborn. Also in the spotlight were a category of drugs known as protease inhibitors, which block a step in the replication of HIV, and the use of genetic engineering to help newborns fight off the infection.

However, as the virus replicates rapidly and the frequency of its mutations enable it to resist even the most promising drugs, opinion at the conference veered around to the view that a combination of azt, didanosine and a protease inhibitor may be more effective in controlling it. As Stefano Vella, a researcher from Italy, pointed out, combination therapy for HIV and AIDS "is the obvious future for treatment".

Slow and steady progress in AIDS research is all that can be hoped for. "The focus has shifted from large, earth-shattering discoveries to something where we make small, incremental progress," says Stephen Cox of the New York-based Treatment Action Group. But this bodes ill for developing nations. "Some in the poorest countries don't even have the means to pay for blood tests," asserts who director Hiroshi Nakajima.

Preventing the spread of HIV offers the best hope where the disease has just staged an appearance. In Thailand, public health campaigns and the mass promotion of condoms led to a 77 per cent drop in sexually transmitted diseases between 1986 and 1993. "In places where the epidemic is just moving into the early explosive phase the overriding need is to act now," says Michael Merson, head of who's global programme on AIDS.