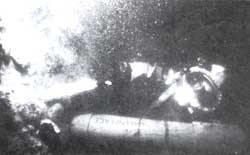 THE flow of radioactive waste into the Irish Sea will be rapidly cut, Britain promised recently. But the clean-up will take much longer than what the government has suggested, say expert calculations.

At a meeting of the member nations at the Oslo-Paris (OSPAR) convention on marine pollution in the northeast Atlantic held in June-end this year, Britain's deputy prime minister John Prescott promised to cut radioactive emissions into the sea around Britain to near zero by 2020. But "near zero" was not defined in the agreement reached at OSPAR, and this has allowed the nuclear industry, the government and the environmental lobby all claim victory, since each side can interpret "near zero" as it wishes to. Greenpeace claimed recently that the OSPAR agreement "signals the beginning of the end of the nuclear reprocessing industry".

The government and British Nuclear Fuels (BNFL) have agreed that over the next 18 months they will draw up a strategy for meeting the target. This will centre round plans to clean up two of the most highly radioactive discharges into the Irish Sea, both of which are from BNFL'S Sellafield plant in Cumbria, which handles spent radioactive fuel from the nuclear industry's first-generation Magnox reactors. The eight reactors still in service in the UK are all more than 30 years old.

The first target for a clean up will be chemical waste from the reprocessing of irradiated Magnox fuel. These discharges contain increasing amounts of techetium-99, radioactive material that is appearing in lobsters off the coast of Norway. Levels of techetium-99 are increasing because Sellafield has been dealing with a backlog of waste that was previously stored. For the past three years, it has been using its enhanced actinide recovery plant to treat this waste.

The new plant discharges techetium into the sea, even though a similar plant that handles the spent fuel from reactors younger than the Magnox generation seals techetium in inert glass. Colin Partington, BNFL'S principal safety officer, says it will take five years to design and build the technology needed to seal techetium from Magnox fuel. It will take at least as long, therefore, for Magnox discharges to be significantly reduced, he says.

The second form of waste that is causing a problem is the contaminated water used to cool the stored Magnox fuel before it goes to be reprocessed. Though an ion-exchange plant removes 99 per cent of its radioactivity, the water remains seriously contaminated. BNFL accepts that such levels of contamination will probably become illegal in 2020. So, says Partington, "unless there is a big technical breakthrough", the Magnox reactors will have to close in time to allow Sellafield to finish reprocessing all their waste by 2020. The date for their closure could be as late as 2015, he adds, six year later than the date claimed recently by British environment minister Michael Meacher. Despite their age, the Magnox reactors could safely continue operating "for perhaps another 20 years", says Partington.