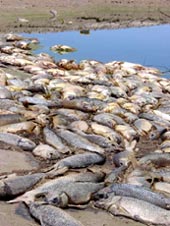 the number of oxygen-starved 'dead zones' in coastal waters worldwide has doubled over the past decade to nearly 150. This was recently reported in the United Nations Environment Programme's first ever Global Environment Outlook Year Book. The findings are alarming -- marine organisms like fish, clams, lobsters, oysters and snails die en masse in these dead zones.

These zones form due to an excess load of nutrients, mainly nitrogen, in the waterbodies. Nitrogen is dumped into the oceans in the form of fertiliser runoff and sewage. When these two combine with nitrogen-rich emissions of industries and vehicles, they trigger blooms of tiny marine organisms called phytoplankton. The rapid growth and decomposition of these organisms uses up a lot of oxygen of the seawater, leading to the formation of the dead zones.

The economic cost associated with these areas is unknown, but it is predicted to be "significant" on a global scale. The earliest recorded dead zones are in places like Chesapeake Bay in the us, the Baltic Sea, the Kattegat, the Black Sea and the northern Adriatic Sea. A few have been reported in Scandinavian fjords. The most well known area of depleted oxygen level is in the Gulf of Mexico. Its occurrence is linked to large amounts of fertilisers deposited in the gulf via the Mississippi river.

There is concern that more oxygen starved areas will emerge in coastal waters of Asia, Latin America and Africa, with industrialisation and more intensive agriculture increasing the discharge of nutrients. Experts believe that global warming would also aggravate the problem. As per research from the us-based Virginia Institute of Marine Science, with rainfall increasing due to doubling of carbon dioxide levels, there will be a marked increase in the levels of runoff from rivers into the seas. The researchers calculate that dissolved oxygen levels in the northern Gulf of Mexico could fall by 30 to 60 per cent with temperatures increasing.

Actions to reduce the threats should mainly focus on the nitrogen overload. Planting more forests might help, as flora has a high ability to 'soak up' excess nitrogen and slow down its movement from the land to the waterbodies.