Dealing with the past 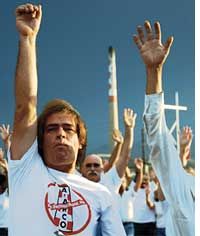 the bid by India's metals and mining company Sterlite Industries, a subsidiary of British mining group Vedanta Resources, to buy us copper mining company Asarco, has run into rough weather. Five environmental groups have raised objections to the us $2.6 billion takeover bid because of the controversial environmental and human rights record of Vedanta resources in India and Zambia.

Sierra Club, Environmental Integrity Project, Public Citizen (Texas Office), Galveston Houston Association for SmogPrevention and Sustainable Energy and Economic Development Coalition have registered protest in a joint letter to us Attorney General Michael Mukasey. They urged the Department of Justice (doj) to proceed with caution before turning over the century-old Asarco (American Smelting and Refining Company)--"which has a record of being one of the worst polluters in the country"--to a new corporate parent with a weak environmental record.

The groups find it troubling that a doj representative told the court that Vedanta's environmental record, based on lower Indian environment standards, should not be a "disqualifying factor". They emphasize that Asarco may be handed over to a company with pollution record so bad that it can eclipse Asarco's sorry example. The deal requires Mukasey's approval since Asarco had filed for bankruptcy in 2005. According to Oliver Bernstein of Sierra Club, "Asarco is notorious for playing shell games to avoid its clean-up liability".

Asarco, a copper conglomerate, has presence in more than 20 states. Its environmental liabilities are estimated between us $500 million and us $1 billion, and the company's name is attached to 19 Superfund sites--created to protect people, families, communities and others from heavily contaminated, abandoned toxic waste sites--across the country. Asarco filed for bankruptcy protection after it was sued for us $1 billion over environmental clean-up and asbestos claims. It has been trying to sell its assets to emerge from bankruptcy.

Even two Arizona members of House of Representatives have sent a letter to the us Attorney General urging the doj to investigate Vedanta's environmental record before allowing the deal to proceed. In their letter, the two Congressmen have alleged that Vedanta has "established an operating record in India and Africa that does not bode well for responsible stewardship of the assets in the us". The letter cited reports that Vedanta may have engaged in environmental labour abuses, including contaminating water supplies near mines in India and Zambia, improperly disposing of toxic waste and failing to provide protective gear to mine workers. The Congressmen have also stated that if doj approves the Asarco settlement before probing Vedanta's environmental record, "we will ask the Arizona Department of Environmental Quality to conduct an investigation before approving any transfer or offering permits to the new owner".

This acquisition will make Sterlite the world's third largest copper producer as it will acquire Asarco's three copper mines and a smelter in Arizona and a copper refinery in Amarillo, Texas, adding copper smelting capacity of 635,000 tonnes per year and copper reserves of five million tonnes. Vedanta will acquire Asarco's viable operations and not the clean-up cost, conceivably leaving taxpayers holding the bag. The Sierra Club estimates that clean-up at Asarco's El Paso site in Texas alone will cost between us $100 million and us $200 million. According to the company's statement, the deal is cash-free and debt-free. "Sterlite will assume operating liabilities but not legacy liabilities for asbestos and environmental claims for ceased operations."

Grupo Mexico, the parent company of Asarco, plans to challenge the sale to Sterlite. Grupo Mexico had bought Asarco in 1999 and lost control over it in the bankruptcy proceedings. It contends that the court-ordered auction was flawed. Even a judge of a bankruptcy court in Texas recently suggested that he might give the parent company a chance to resume control of its us subsidiary. While bidding, the Mexican company had promised to pay all creditors in full and take Asarco out of bankruptcy.