On the 10th anniversary of the Basel Convention, member states reiterate the need to minimise the generation of hazardous waste 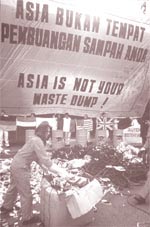 "The Basel Convention has taken the important decision to begin efforts to tackle the root of the hazardous waste crisis - the continued and unnecessary use of hazardous chemicals in our products and processes," said Kevin Stairs, political adviser for Greenpeace, the environmental pressure group. "Once toxic chemicals are allowed into our products, manufacturing and recycling processes, they will later haunt us as pollution and toxic waste," he added. The 5th Conference of the Parties ( cop 5) to the Basel Convention also made significant progress in the ratification and entry into force of law of the Basel Convention Ban Amendment which prohibits the export of hazardous wastes from developed to developing countries.

Already, the Basel Ban has 17 ratifications of the 62 needed to enter into force. Countries that indicated that they were planning to add their names to the list include China, Algeria, Egypt, El Salvador, Argentina, Pakistan, Venezuela, Bangladesh, Syria, Chile, Namibia and Oman. "We are thrilled that the landmark Basel Ban Amendment is well on its way to entry into force," said Ravi Agarwal of the Basel Action Network ( ban ), a non-governmental organisation.

The cop 5 meeting also adopted a liability protocol that the environmentalists called a "great disappointment". Environmentalists say that the protocol fails to hold generators always liable for the wastes they produce and fails to cover damage that might occur after disposal of the hazardous wastes. The developed countries also refused to commit to a compulsory fund to assist developing countries in the event of a waste emergency.

"The protocol is a dangerous precedent and is unlikely to ever provide adequate relief for victims of toxic waste or serve as an incentive to avoid hazardous waste trafficking," said Stairs.