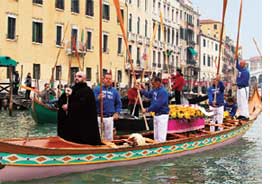 At high noon on November 14, a gondola bearing a hot-pink plywood coffin decked with yellow flowers made its way down Venices Grand Canal. Onlookers watched from the shore and shouted greetings from a bridge before the boat appeared in front of the Venice city hall. A piano played mournful music. The spectacle was the centrepiece of a fake funeral for the city of Venice. A group of provocateurs organized it to protest the fact that the number of residents in Venices historic centre has dropped below 60,000, down from 74,000 in 1993, as rising rents and tourists have pushed thousands to the mainland.

Local people feel like an endangered species. Venices housing commissioner, Mara Rumiz, compared the stunt to a funeral for a father who is still alive, which in general brings a bit of bad luck.

Real estate prices are steep in the historic centre, and many property owners can command far more with short-term rentals to foreigners than with long-term rentals to residents.