Death on its agenda 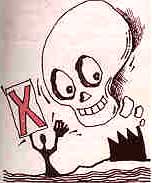 MARDIA Chemicals Ltd (MCL) of Gujarat has been producing H-, J- and K-acids, tobaid acid, vinyl sulphone, dye intermediates and sulphuric acid since January 1991, with what are suspected to be 'second-hand imported plants. Reports of pollution by the plant poured in 1991 itself.

Complaints of air, water and ground water pollution reached the Gujarat Ecology Commission (GEC) right from 1992. The Ghc referred the complaints to the Gujarat Pollution Control Board (GPCB), with no results. More complaints led the GEC to knock at the Central Pollution Control Board's doors, which in turn referred back to the GPCB which said that pollution in Sayala was well within limits.

Some of the significant findings of the team are:
• The company is operating without the necessary No Objection Certificate and consent from the GPCB.

• Although the factory started production in January 1991, the consent order for non-naphthalene-based products was issued in January 1995 - four years later.

• When production commenced, there was no effluent treatment plant.

• Till March end 1995, the factory had not even applied for hazardous wastes disposal authorisation from the GPCB. It appeared that no initiative has been taken by the factory in this regard.

• The treated effluent quality does not confirm to the stipulated GPCB standards.

The team concluded that:
• The industrial complex, being located in a land-locked area, has no natural point for waste water disposal.

• Sayala falls in the semi-arid zone having a rocky strata. The factory, the only one in the area, daily uses 1,700- 1,800 cu m of fresh water through 22 borewells.

• The MCL'S water requirements is very high. Groundwater has already been over-exploited.

• The steadily falling groundwater table is getting polluted due to chemical discharges.

• It seems that geological and hydroiogical aspects of the terrain had not been surveyed carefully by the government while permitting the MCL to instal its plants. The rocky area has fissures that facilitate permeation of polluted water.

• The site is in the catchment area of Bhogavo river, upstream of Nayaka and Dholiclhaja reservoirs. There is the possibility of contamination of these reservoirs spelling disastrous consequences.

Even as the expert team recommended that no further expansions or diversifications be permitted at the site, some new units were inaugurated at the site in December 1995, in the presence of none other than Prern Shankar Bhatt, the then GPCB chairman.

Bharat Pathak, director of the GEC, said ruefully, "The GPCB is just an eyewash. It is not adequately empowered to monitor or act in such cases."