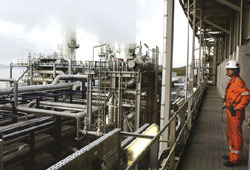 shell and Statoil, the uk and Norwegian oil companies, have signed an agreement on March 8, 2006, that involves burying carbon dioxide (co2) under the North Sea bed. The oil companies plan to take co2 from power plants in Norway and pipe it to aging oil wells under the sea, where it will be used to force oil to the surface. The scheme, worth us $1.2-1.5 billion, will require major investment from the governments, experts reckon.

According to the agreement, Statoil would extract co2 from its natural gas-fired power station on the Norwegian coast, which would be pumped to Shell's Draugen oilfield in the North Sea. The gas would be injected into the uk company's oil-bearing strata to force more oil to surface. According to Statoil, the venture would be the world's largest enhanced oil recovery project.

"This project responds to vital challenges that the society, environment and industry are going to face in future," said Helge Lund, chief executive officer of Statoil. To comply with the European Emissions Trading Scheme, uk oil and power companies now need to keep their emissions below a certain target. Process of carbon sequestration under the seabed fits their bill: experts view it as a partial solution to global warming, while helping companies to further exploit their oil reserves.

But the limitations of sequestering carbon have raised eyebrows. The gas can only be trapped from large point emission sources such as power stations. But many of the uk's large power stations and heavy industries are hundreds of kilometres away from the North Sea oil wells. This would make the process logistically difficult and render it costly.

Norwegian companies, in contrast, have to pay a carbon tax for releasing the gas to atmosphere; Statoil would rather store it under sea. But such means have also elicited concerns. Chief among them is the fear that the trapped co2 would eventually resurface, despite all the claims of Statoil.