India, which lacks controls on antibiotic use in poultry and meat, said that antimicrobial resistance must be seen as a development challenge 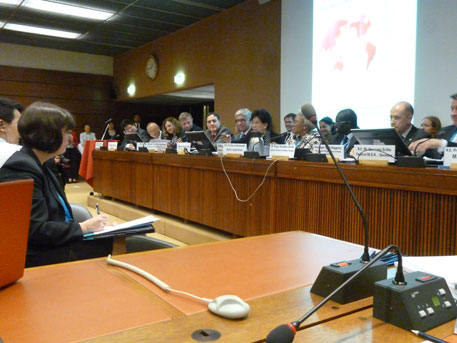 Discussions on the draft global action plan on antimicrobial resistance (AMR) are in progress at the 68th World Health Assembly (WHA) currently being held in Geneva.

Last year, the 67th WHA had asked the World Health Organizations’s (WHO) director-general to draft a global action plan to combat antimicrobial resistance. The WHO drafted a global action plan after several rounds of consultations with member states and submitted it for consideration at the 68th WHA in March this year.

With the goal “to ensure, for as long as possible, continuity of successful treatment and prevention of infectious diseases with effective and safe medicines that are quality-assured, used in a responsible way, and accessible to all who need them”, the draft action plan recognises the need for urgent action with national, international and mulitsectoral action.

The plan came up in Committee A after lunch on May 21 and India was the first to make a statement. India said that it is important to underline that AMR is a development challenge and not solely a health security issue.

The delegation raised concerns such as lack of new antibiotics, need for research and development and need to address the issues of the poor countries. "We hope that these concerns can be taken into account by the secretariat group. We request chair to seek further operational discussion on draft resolution," the delegation said.

India is part of South Asia and the regional statement was provided by Thailand. In it, the group asked for clear statements on animals and crop plants (prophylaxis purpose). Thailand pointed out that while the action plan promotes vaccination in animals used as food, there is not enough evidence on vaccine efficacy. The group as a whole supported the action plan.

While Thailand and many other states pointed out a comprehensive strategy, which controlled use in animals, humans and agriculture, to combat AMR, India is way behind on necessary controls on antibiotic overuse in food-producing animals. The national policy on containment of antimicrobial resistance of 2011 fails to provide necessary focus on antibiotic overuse in animals and spread of resistance through food and environment.

Clearly, the country needs to cover a lot of ground to contain antimicrobial resistance. India, which has largely unsanitary conditions, is burdened with high load of infectious diseases such as tuberculosis. There is not much of a choice except to rise up to the challenge and work alongside the global community for the health of the nation.

Member states that got an opportunity to speak on Thursday endorsed the plan. So far the issues raised include lack of financial support and lack of data. The final decision will be taken today.