Plan chalked out to keep marine aliens at bay, but implementation unlikely soon 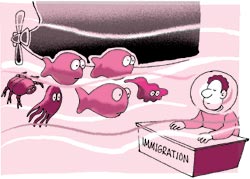 In the 1990 Hollywood film, Arachnophobia, a South American killer spider hitchhikes to the us in a coffin, and then goes on a breeding and killing spree. Fiction has now turned into fact. While a Chinese mitten crab is wreaking havoc on an English river in a similar manner, a European zebra mussel has invaded the Great Lakes in North America. Aquatic alien species such as these are considered one of the four greatest threats to the world's oceans (see: 'Invasive alien species', Down To Earth, February 29, 2004). To tackle this menace, a global treaty was adopted on February 13.

The International Convention for the Control and Management of Ships' Ballast Waters and Sediments was approved during the International Conference on Ballast Water Management. The meeting took place at the International Maritime Organization's (imo's) London headquarters. The treaty aims to prevent alien organisms from destroying marine ecosystems and damaging human health by contaminating seafood. It envisages managing the source through which these species travel. But neither will the pact have an immediate impact, nor does the technology exist to address the problem.

Ballast water is carried by ships to provide stability to the vessels when they contain little or no cargo. It is the principal medium responsible for transporting more than 4,000 of the alien organisms daily. To date, the us has spent us $140 billion to clean up the damage such species cause. An estimated 10 billion tonnes of ballast water is transferred each year across the world. In India, 5,000-odd ships release 2 million tonnes of ballast water annually at the Mumbai port alone. With 12 major ports and a 7,500-kilometre-long coastline, the country is a high-risk zone. India's figuring in the 74 nations that inked the treaty is, therefore, hardly surprising.

It is noteworthy that only voluntary imo guidelines existed prior to the adoption of the pact. Although encouraging the implementation of safe and effective procedures for ballast water management, they lacked specific targets.

The Ballast Water and Sediments Management Plan, which is a part of the recent treaty, will require new vessels to be fitted with equipment for treating ballast water after 2009. All other ships would have to conform to this clause in a phased manner by 2016, with the larger ships being given the longest mercy period. A deferred deadline was set because the technology to treat the huge volumes of ballast water in compliance with the set standards hasn't yet been developed. To be sure, the treaty seeks to promote efforts to evolve such a method. "The most important benefit of the convention is that it provides incentives for investment in research and development of ballast water treatment technology," points out Andreas Tveteraas, head of the World Wide for Fund Nature delegation to the negotiations.

As per the new plan, the water treatment equipment will aim to limit the discharge of living organisms greater than 50 microns in size to not more than 10 per cubic metre (1,000 litres), and those less than 50 microns but greater than 10 microns to not more than 10 per millilitre. In the interim period, ships will be required to change ballast water at least 200 nautical miles (370.4 kilometres) from land before entering a port. Additionally, they would have to carry out this task in water that is at least 200 metres deep.

Three areas emerged as the stickiest issues during the negotiations. Firstly, the standard relating to the number of organisms that can be discharged was keenly debated. The us wanted the discharge to be limited, but Japan and Norway proposed higher levels. A compromise level of 10 organisms per cubic metre was arrived at. The second contentious matter was regarding the countries applying more stringent measures without seeking the imo's approval. The final agreement, a compromise, states that the approval must be sought "as appropriate". Lastly, the requirements for the convention's enforcement were strongly contested. Finally, 30 states and 35 per cent of the ship's tonnage were fixed as being sufficient for the treaty to become legally binding.

Twelve months after this target is achieved the treaty will come into force. But some worry that like other global treaties, it will be years before this convention becomes international law.

With inputs from Tirthankar Datta