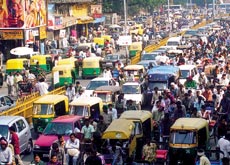 The Supreme Court (sc) has told the Delhi government to rid the capital of traffic congestion. In this regard, the state authorities have been instructed to control the number of vehicles plying on the city's roads. The sc took note of a statement of concern from the Centre for Science and Environment (cse), and treated it as an interim application.

Amicus curiae Harish Salve highlighted key concerns raised by cse that identify the serious challenges Delhi faces today. These include an increase in the number of private vehicles, and the growing pollution from slow and congested traffic. The city already has more than 4 million registered vehicles and is adding more than 200,000 vehicles every year. If the trend is not checked, the gains from small improvements in vehicle technology and fuels will be lost. It was also brought to the notice of the court that inadequate public transport is increasing dependence on private vehicles.

In another vehicular pollution-related development, the Mumbai High Court has asked the Maharashtra government to file an affidavit explaining its stand on the traffic restraint scheme for Mumbai. The plan was proposed by the V M Lal Committee way back in 2000.