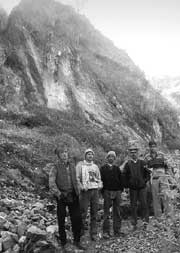 it may well be a flashback to the 1970s for the mountainous village of Kataldi in the Tehri district of Uttaranchal. Just as in the past, the villagers are up in arms about the granting of a mining lease to a private firm. They contend that limestone mining will bring ecological destruction right on their doorstep by drying up the only source of water in the region, destroying common pasture lands, denying them access to abutting forests and damaging nearby houses.

In the face of spirited protests by the local inhabitants, district magistrate (dm) Radha Ratury has called a temporary halt to work and written to the industrial development secretary in the state government, recommending suspension of the mining lease. The agitation is being spearheaded by the m ahila mangal dal (women's group) that has, by and large, been successful in thwarting the contractor's attempts to remove limestone from the mine site. And as the stir gathers momentum, it could snowball into a burning issue ahead of the assembly elections in the hill state.

At the core of the dispute is a thirty-year mining lease on a 5.3-hectare revenue land that was granted to Parvitiya Mineral Industries on August 18, 2001. Not only was the gram sabha (village council) kept in the dark about this decision, even the dm and patwari were not intimated.

Consequently, when contractors commenced work in December 2001, the entire village rose in protest. The dm promptly ordered an enquiry into the matter by the sub-divisional magistrate (sdm). Without seeking any expert advice, the sdm suggested that mining be allowed in most of the leased areas.

"He glossed over glaring factual inconsistencies. Whereas the map appended to the lease does not indicate the presence of a single house in the vicinity of the mining area, many people reside just a stone's throw away from the site," points out Kunwar Singh of Kataldi. "How could he ascertain that the water spring, which also irrigates downstream fields in Nagni village, will not dry up? His report was an eyewash," claims Singh dismissively. The sdm also overlooked the fact that part of the leased land is a van panchayat , used by villagers to extract fuelwood and fodder.

I was not taken into confidence by the department prior to sanctioning of the lease," clarifies the dm. "It was signed under unusual circumstances without following the stipulated procedures. But only the secretary is authorised to revoke it," adds Ratury. Though her order has given the villagers a brief respite, it has left the sword of Damocles hanging over them. Legally, the leaseholder (who is said to be an influential contractor) can still resume mining operations should he choose to do so, opine experts.

The section officer in the state industrial development department too feels that the lessee firm has a right to recommence work. He defends the decision to grant the lease: "We followed the routine procedure. In fact, all we have done is extend an earlier lease given in 1997, from six years to 30 years. Therefore, the usual environmental clearances are not required."

Neither he nor the dm take cognisance of the fact that Kataldi has protested mining in the area since the 1970s when a lease was granted for the first time in the region. Significantly, in 1997 too mining work by the same firm was suspended. The then dm had seen reason in the villagers' protest and nipped in the bud any such ecologically damaging activity.

The villagers are banking on the civil society's support. "Why doesn't the government let people decide what is good for them? We will not let them impose this kind of 'development' on us," says Vijay Jardhari, a Chipko movement veteran from Kataldi. For now, the local inhabitants are hoping that history will repeat itself.