The giant squid, a deep sea tentacled monster, may no longer be able to play hide and see with the scientific community. A team of biologists are planning to track it down to its nest and capture it .. on celluloid 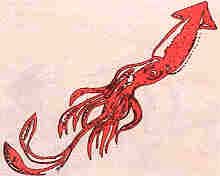 IN-A bid to crack the elusive ways of the giant squid, the National Museum of Natural History (NMNH) under the Smithsonian Institution in Washington, us, is mounting a giant expedition in the south Pacific near New Zealand, to study the creature in its natural habitat. Marine biologists from New Zealand are assisting the American team. Clyde F E Roper, a leading squid expert from NMNH defends the idea of investing a whopping sum of us $5 million for the purpose, by calling it "a relatively tiny investment when one thinks of the potential for knowledge and information generated, particularly since we know so little about their biology and behaviour." The tentacled monsters and their habitat have remained shrouded in mystery despite innumerable expeditions to the deep. Although squid experts have tried persistently, they have so far been unable to lay their hands on a live specimen. They are as yet unaware about how these creatures swim, eat, rest, court and mate. All this will remain a mystery till biologists are able track them down to their nest.

The giant squid is no ordinary being. It has the distinction of holding a number of world records. It is believed to be the largest animal without a backbone. Some specimens have measured 18-21 m in length. Its huge eyes are the largest in the animal kingdom, sometimes the size of a dinner plate. And its nerve fibres are so huge that they were initially mistaken for blood vessels.

But the fact remains that the monster largely represents our ignorance of the deep. Experts have so far mainly depended on the specimens captured by fisherfolk for their knowledge. Invariably, the animals retrieved from overwhelmingly full fishing nets are found squashed and battered to death. What is now expected to guide Roper and his team to the squids' den is the food chain. Findings have revealed that giant squids feed on certain types of deep sea fish. Squids in turn are eaten by sperm whales. The NMNH team intends tracking squids by following the fauna from both ends of the food chain, hoping that they could zero in on them somewhere in the middle.

Some experts are not very enthusiastic about meeting this boneless leviathan in its home ground. What puts them off are the ten large tentacles lined with sucker pads. Ellen C Forch, a fisheries biologist from New Zealand says, "I have a lot of respect for these animals", but she prefers to keep her distance and will be part of the monitoring team operating aboard a ship.

The team of scientists initially plan to send a robot down for an inspection Of the area. The group will then follow in a submersible called Johnson Sea-link operated by the Harbour Branch Oceanographic Institution in Fort Pierce, Florida, us. The Johnson Sea-link - a large acrylic sphere designed to provide maximum visibility - will carry four people to a depth of 1,000 m, where the creature is supposed to live. Aided by the submersible's robotic arms, lights and video cameras, the pursuit of the creature might rival a scene from a thrilling science-fiction movie and the best of all, it would be fact and not fiction. Says Roper, "If we find and film one (giant squid), it would be absolutely spectacular. Even a few minutes of filming would give us a lot of information."