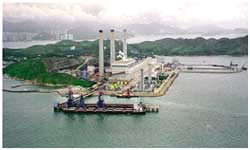 A round 2,800 fisherfolk in Hong Kong are demanding about us $180 million compensation from the Hongkong Electric Company (hec), a private firm, for the loss of fish stock and fishing gear allegedly caused by the laying of a natural gas pipeline in the territory's seabed.

A spokesperson for hec said, "If the claim is genuine, we will seriously consider compensation for the loss of fishing gear." She added the company had already given the government an ex-gratia allowance as a guarantee.

The fisherfolk claimed a rock hillock created on the ocean floor to cover a 13 km section of the underwater pipeline was cutting up their trawling nets, and had led to an almost fifty per cent decline in fish stock. They also claimed that they were not informed that the rocks would reach above the seabed until last October, when they began discovering damage to their gear.