Increase in incidence of earthquakes in Kerala, otherwise a seismically stable zone, is due to high sea pressure and changing land- use patterns 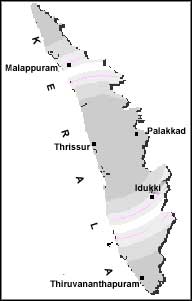 IN 1996, Kerala, considered a seismically safe zone, witnessed a tremor of magnitude 2.8 (on the Richter scale). This is not 4D isolated case, for the state has lately been seeing an increase in the frequency of tremors in its central and southern parts. Studies by C P Rajendran and Kusala Rajendran, earth scientists at the Centre for Earth Science Studies (CESS), Thiruvananthapuram, show that this increase in tremors in relatively stable regions is associated with the reactivation of ancient faults.

The reseaTdhers@ say an increase in the occurrence of micro-tremors was reported fr@m the districts of Idukki, Thrissur and parts of Thiruvananthapuranm during the past eight years. Historically, the largest earthquake (magnitude 5.5) that occurred in southern India was in the year 1900 at Coimbatore. As Kerala is not known to be a high-seismicity zone, an earthquake of magnitude 4.3 that occurred near Wadakkancherri in Thrissur district in 1994 has confounded scientists and caused much alarm among residents. According to a CESS report, the earthquake was felt in an area of 1,000 sq km in Thrissur, Palakkad and Malappuram in the state. The earthquake was followed by more than 100 small tremors lasting upto February 1995.

Seismic data collected by CESS scientists indicate occurrence of minor earthquakes within the confines of a regional structure called 'Palghat gap'. This is a large tectonic structure that passes through the district of Palakkad in Kerala, and is marked by high-rising hills to its north and south. The report suggests that "in the backdrop of observed seismicity and likelihood of causative structures, the region comprising the 'Palghat gap' may be considered seismogenic".

According to the researchers, an interesting relationship between micro-tremors and rainfall has been observed in Kerala. A majority these tremors have occurred during periods of increased rainfall. The state receives its major share of rainfall from June to September and October to November every year. Also, almost all the tremors reported have occurred in the vicinity of river channels, which suggests that earthquakes are associated with weak zones and increased water pressure. This, they point out, is mainly due to changes in land-use patterns in Kerala. Deforestation, quarrying, filling of low-lying areas, erosion and siltation of river beds after the hydrodynamic nature of the regions.

Past experiences of earthquakes that occurred in Killari and Koyna show that a better understanding of their mechanisms and causative structures is needed. An increase in the number of seismic stations to monitor background activity is required. In the case of Kerala, better understanding of background seismicity and the hydrodynamics of selected drainage basins is required before it is too late, say CESS scientists.