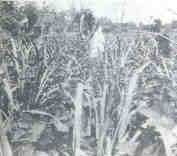 Because growing sugar cane involves a long gestation period of about 12 months, small and marginal farmers resort to intercropping of short- duration crops like vegetables, pulses and groundnuts to sustain them through this time span.

With a minimum spacing of 80 to 90 cm that is required to be left between rows of sugar cane plants, adequate area is available for easy intercropping of soyabean.

An excellent compatibility for co-existence of these 2 crops is found on account of mutually accommodating physical structures of the plants. While the sugar cang plant has erect leaves, soyabean has broad leaves of horizontal spread that makes utilisation of solar radiation full and effective.

Further, there is found to be no competition between sugar cane and soyabean plants for essential resources, as water and nutrient requirements for soyab6an are low.

Moreover, researchers found that this intercropping considerably reduces the dependence of sugar cane on chemical fertilisers. This is due to bio-fixation of nitrogen by the root nodules of soyabean. As only one-third of nitrogen thus fixed is used by soyabean, the rest is left in the soil for sugar cane.

Heavy soyabean leaf shedding is regarded as another -benefit of this intercropping. Occurring, Rm at a rate of about 3 tonnes of soyabean leaves per hectare, it adds to the humus content of the soil making it more fertile. Besides, it is found to create a leaf-covering of the area between the cane rows, thereby preventing excessive evaporation of moisture and nutrients. It is found to smother weed growth as well.

In light sandy soils, these roots aid the binding of soil particles, helping in retention of moisture and nutrients in the top layer.

Considering that sucking and boring pests cause tremendous damage to cane growth, soya leaves which are softer and more succulent than sugar cane's are found to provide a preferable feast for these pests. Researchers have confirmed that soyabean proves to be a good "trap-crop" for cane pests which considerably reduces their attack on sugar cane plants.

All findings indicate that soya intercropping enhances sugar caneyield by a minimum of 7 to 10 per cent as compared to sole cropping of sugar cane. In addition, soyabean crop residue can provide cattle fodder to sugar cane farmers who face immense problem in raising enough cattle fodder till cane-harvest.