The discovery is important as it provides an insight into how larger, complex cell types, called eukaryotes, actually evolved from small and simple microbes, experts say 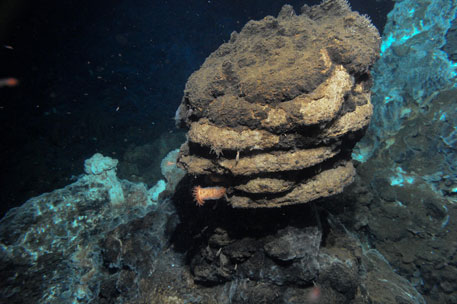 Scientists have found microorganisms beneath the Atlantic Ocean between Greenland and Norway, which according to them, are the missing link connecting simple cells to a more complex cellular life.

Researchers said a group of microorganisms known as Lokiarchaeota, or Loki in short, were found on the seabed about 2.35 km  beneath the ocean's surface, a new report published in the journal, Nature, says. The place is close to a hydrothermal vent system called Loki's Castle, named after a Norse mythological figure.

The discovery is important as it provides an insight into how larger, complex cell types, called eukaryotes, actually evolved from small and simple microbes, experts say.

The origin of the eukaryotic cell remains one of the most contentious puzzles in modern biology, according to the study.

All organisms can be cassified into two groups—prokaryotes, which have simple cells, and eukaryotes, which have complex cells.
Prokaryotes are organisms having a single cell. They comprise all bacteria and archaea (a group of microbes that were once considered to be bacteria). Eukaryotes consist of some single-celled life forms as well as all multi-cellular organisms such as animals, plants and fungi.

The Lokiarchaeota are part of a group called archaea that have relatively simple cells and lack internal structures such as a nucleus. But the researchers found that the Lokiarchaeota share with eukaryotes a significant number of genes, many with functions closely related to the cell membrane.

These genes would have provided the Lokiarchaeota “with a 'starter-kit' to support the development of cellular complexity,” evolutionary microbiologist Lionel Guy of Sweden's Uppsala University was quoted by the media as saying.

Another biologist says we now know where we come from. “Essentially, Lokiarchaeota represent a missing piece of the puzzle of the evolution from simple cells—bacteria and archaea, prokaryotes—to complex cells (eukaryotes), which includes us humans,” Uppsala University evolutionary microbiologist Thijs Ettema, who coordinated the study, was quoted by the media as saying.

The Lokiarchaeota were retrieved from oxygen-starved sediment layers during voyages of a Norwegian research vessel, said a microbiologist of Norway's University of Bergen.

“Hydrothermal vents are volcanic systems located at the ocean floor. The site where the Loki were found is heavily influenced by volcanic activity, but actually very low in temperature,” says Steffen Leth Jørgensen from Univeristy of Bergen, who collected the samples where Loki was found and is one of the co-authors of the study.