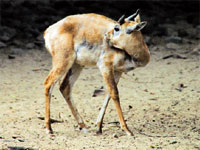 UTTARAKHAND government has opposed a recommendation by a Supreme Court committee to increase the area of Askot Musk Deer Wildlife sanctuary in Pithoragarh district. It said the extension would raise discontent among people living around the sanctuary.

Activists allege the government is opposing widening of the sanctuary as it will restrict tapping of the area’s high hydroelectric potential. The sanctuary was notified in 1986 under the Wildlife (Protection) Act, 1972. Its area was set at 600 square km but its boundaries were not marked. In 2007, the state filed a case in the court seeking permission to exclude 111 villages from the sanctuary and asking for the rationalisation of its boundaries.

The Central Empowered Committee, a Supreme Court-appointed body which looks into encroachments on forests, agreed to exclude the villages but observed the area of the sanctuary, implemented on the ground, was about 2,700 square km. 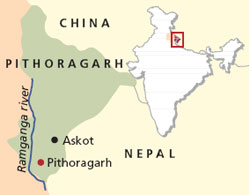 In August 2009, the committee recommended to the court that after excluding the villages, an area of 2,228 square km including the river Dhauliganga be notified as the sanctuary area. Uttarakhand filed an affidavit in the court in October this year saying the extension should not be carried out. “The state’s opposition has nothing to do with interests of wildlife or residents.

They are just worried about not being able to utilise the area’s hydro-electric potential,” said Pankaj Sekhsaria, editor of Protected Area Update, a bi-monthly on wildlife and protected areas. There are 14 hydroelectric projects proposed within the existing sanctuary area and many more in region recommended by the committee, he added. Residents around the sanctuary protested the recommendation citing the provisions of the Wildlife Protection Act, which do not allow sale or purchase of private land and infrastructure development in sanctuaries.

K Ramnarayan of Himal Prakriti, a non-profit based in Uttarakhand, said political parties are using the conflict as an issue to gain votes in the upcoming state assembly elections. “They are misguiding people by saying the committee has recommended extension of the sanctuary. In fact, it has recommended decreasing the area from 2,700 to 2,228 square km,” Ramnarayan said.