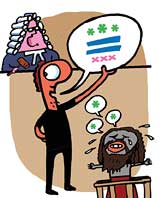 A report in an Australian state legislature has highlighted that people from aboriginal communities languish in prison because of a dearth of interpreters.

Reacting to the report, the opposition party in the South Australian government wants the state government to resolve the problems arising from a lack of competent and reliable aboriginal interpreters at Port Augusta Court, which services aboriginal in the state.

A Port Augusta magistrate, Clive Kitchin, has also joined the debate. “Aboriginal defendants are denied fair hearings and kept in custody for longer than required because they do not know English and there aren’t many interpreters,” he said. Opposition Leader Isobel Redmond said the government needs to implement a recommendation from the Royal Commission into Aboriginal Deaths in Custody and recruit and train aboriginal people as court staff and interpreters.


“It’s unacceptable to find a situation where people can’t get access to justice because of the lack of interpreters,” she said.