Fallout could be linked to increasing droughts 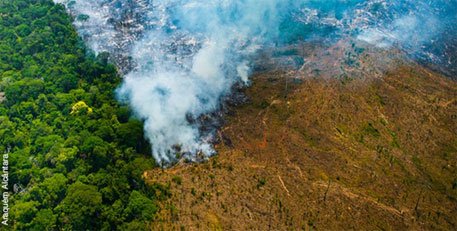 The Amazon rainforest, the largest in the world, is losing its ability to regulate climate due to degradation from logging, forest fires and land clearance, warns a new study. This could be linked to increased droughts, such as the current one in São Paolo.

Antonio Nobre, a researcher in the British Earth System Science Centre, has drawn the conclusion after analysing more than 200 papers on Amazonian climate and forest science, reports The Guardian. He warns in his study that the “vegetation-climate equilibrium is teetering on the brink of the abyss”.

According to Nobre, the Amazon works as a giant pump, channeling moisture inland via aerial rivers and rainclouds that form over the forest more dramatically than over the sea. It also provides a buffer against extreme weather events, such as tornados and hurricanes. But all this could be a thing of the past. The author notes that in the past 20 years, the Amazon has lost 763,000 sq km—an area the size of two Germanys. This has resulted in a decrease in forest transpiration and prolonged dry seasons.

This could be one of the factors leading to droughts. São Paulo, the biggest city in South America, is facing its worst water shortage in almost a century, says The Guardian. October, which is usually the start of the rainy season, was drier than at any time since 1930, it adds.

“Amazon deforestation is altering climate. It is no longer about models. It is about observation. The connection with the event in São Paulo is important because people are finally paying attention,” the newspaper quotes Nobre. He calls for a “war effort” to reverse the damage caused to the Amazon, which would involve halting deforestation and replanting trees on a large scale.

This seems a Herculean task given the current position. According to The Guardian, forest clearances have increased under Brazil’s new President, Dilma Rousseff. A majority of the Amazon rainforest (60 per cent) falls in Brazil. Recent satellite data shows a 190 per cent surge in deforestation in August and September. But environment is a low priority for the government, which has tied up with powerful agribusiness groups.

Interactions among Amazon land use, forests and climate : prospects for a near-term forest tipping point