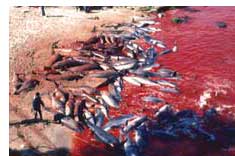 The mayor of a Japanese town, which conducts an annual dolphin hunt, has protested the Academy Award given to The Cove, a documentary on grisly slaughter.

The film follows activists who struggle with the Japanese police and fishermen to reach a secluded cove in Taiji in southern Japan, where dolphins are hunted (see: Taiji Short of Dolphin Meat, Down To Earth, October 15, 2009).

“It is regrettable the film presents material not backed by scientific proof,” Taiji mayor Kazutaka Sangen said. He stressed the hunt was legal in Japan and urged respect for the tradition. Hans Peter Roth, co-author of the book version of the film, said the Oscar would help shed light on the subject in Japan.