The water thirsty capital is the perfect example of how not to manage water. Tracing where the three billion litres disappear everyday 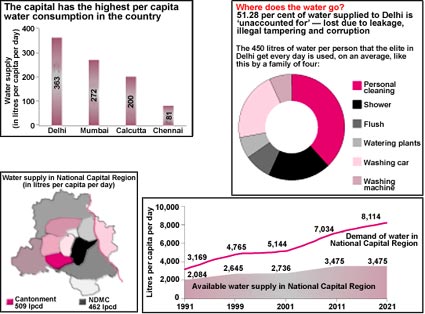 People in Delhi use, on an average, 2.95 billion litres of water every day. About 363 litres per person daily.
>> Since 1961 water production has multiplied six times.

>> The area with five per cent of the city's population (the capital's elite)receives over 450 litres per capita daily at a cost of Rs 0.35 to Rs 0.70 per kilolitre.

>> People in villages covering over 70 per cent of the National capital territory comsume less than five per cent of Delhi's water supply. They get less than 100 million litres per day of water.

>> In some areas, water supply can be as low as 31 lpcd, insufficient for basic needs.

>> Compare this to the national average of 40-60 l per person each day - a bucketful of water for cooking, drinking and bathing.