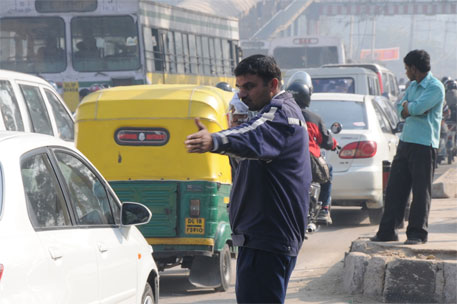 Delhi-based non-profit Centre for Science and Environment (CSE) has welcomed the budget pitch of the Delhi government which prioritises public transport augmentation and service for all. It says the government has taken a step forward to apply the “polluter pays” principle and impose a congestion tax on incoming trucks—the revenue will be used to augment the city’s public transport system.

Daily travel trips in Delhi are expected to touch 25.3 million, leading to alarmingly high pollution levels in the city. Anumita Roychowdhury, CSE’s executive director and head of its air pollution control campaign, says the travel choices of the people will determine the livability of Delhi. “If no further action is taken to radically improve public transport, walking and cycling, Delhi will gasp for breath, pay unacceptable fuel costs and spew warming gases like never before,” she adds.

Among budget highlights is the focus on augmentation of bus transport and improvement in bus transport service. The total proposed expenditure in the transport sector in 2015-16 is Rs 5,085 crore, which is 23 per cent more than 2014-15. The government has proposed to procure about 1,380 semi-low floor buses, 500 midi buses under Delhi Transport Corporation (DTC) and around 1,000 more buses under the cluster scheme by the end of 2016.

It has also proposed to sort out the tangle over depot land for buses which has been holding up bus purchase in the city. For multi-modal integration, the government proposes to work towards a single-fare system on a single media for payment. It will also improve IT applications to provide public information on bus services.

The budget acknowledges that trucks contribute hugely to pollution in the city. It has, therefore, proposed to impose congestion tax on incoming trucks. This fund will be used to augment an environment-friendly public transport system, and install weigh-in-motion bridges to discourage overloading of trucks that cause more pollution. While this is a step forward to apply the “polluter pays” principle, the full potential of this measure can be realised only when this tax is extended to all cars that cause congestion in the city, CSE says.

The budget has sought private sector participation for augmentation of road infrastructure. “Such a move should also mandate implementation of people- and public transport-friendly street design guidelines and not car-centric infrastructure,” says an official release issued by CSE. “Delhi has already massively invested in building roads and flyovers over the past many years, but most of the roads exceed their carrying capacity.”

CSE demands the introduction of high and variable rates for parking across the city to discourage car use and increase revenues from parking. “If this is not done, congestion will be inevitable and so will be its resultant pollution, oil guzzling and a poor quality of city life. Delhi can avoid the looming pollution and congestion disaster only if its transport planning hinges on sustainability, equity, and a people-centric approach,” Roychowdhury adds.