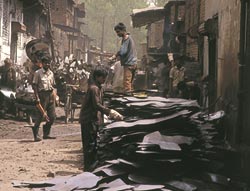 the Supreme Court has given the Delhi government five months to close all industrial units in the state's residential areas, except at the household level, that have come up on or after August 1, 1990. Of these, the 'f' category industries, which cause maximum pollution, have to be shut down within four months. The court has also directed the Union government to finalise within three months the list of household industrial units that could be allowed to continue functioning, while the impermissible ones would have to close down within six months.

The order on May 7, 2004, was issued on a writ petition filed in 1985. "The Delhi government may announce a policy within six months, giving such incentives as it may deem fit and proper to those industrial units which came to be established after August 1, 1990, and may close down on their own before the expiry of the time fixed in the order. The non-announcement of incentives by the government shall not, however, delay the closure process," the court ruled. It warned that the water and electricity connections to the units should be removed immediately after the due date of their closure and, in any case, not later then one month from it. If industrial activity still continues in any unit, its premises have to be sealed within another month. Flaying the state government for the sorry state of affairs, the apex court said: "The growth of illegal manufacturing activity in residential areas has been without any check and hindrance from the authorities."

But the state government is still not decided about how the order would be implemented. "We are planning how to carry out the task. There are more than 100,000 industries functioning in the debarred areas of Delhi. Of these, 35,000-40,000 come under 'F' categaory," points out Jalaj Srivastava, commissioner of industries. J R Jindal, president of Delhi Factory Owner's Federation, warns: "The government should review the situation before taking the drastic step. It would affect one million families that depend on these factories."